In many countries there is an increasing number of stray-dogs in urban areas.

This may be a threat to public health and animal welfare. There is scientific evidence, that human acting is the cause of dogs overpopulation. Without food, water and shelter a dog population will die out. Water and shelter are always there and dogs can survive because people feed them or they may find eatable waste or attack small livestock.

Dogs are dependent on humans and they cannot survive in the wild like cats. Stray dogs are hardly found in thinly populated areas. As humans provide sufficient food and thus conditions for growth of a population, the numbers will have to be reduced in a different manner.

Research has demonstrated that CNVR is the best method:

1. What is CNVR ? Collect Neuter Vaccinate and Return. Also the terms ABC (Animal Birth Control) and CNR (Catch, Neuter & Return) are sometimes used. This method of population management is generally accepted as the most effective solution for overpopulation of stray animals. Stray dogs and dogs with an owner are collected, neutered, vaccinated, marked and returned to the same spot where they came from.

2. Why does this work ? Research has shown, that creating a sterile population will decrease the number of dogs. However, this works only in combination with education and registration. In 1990 the World Health Organization and WSPA have published a report about the most effective method, being a combination of: – Sterilization (at least 70% of the bitches)

– Education (responsible dog-ownership, limited breeding, dumping) – Registration (identification of animal and his owner) Various projects that demonstrate the effectiveness of this method have been conducted.

3. How does this work ? When the majority of the stray animals is sterilized and returned to the same area, the population will diminish and the problem will be nipped in the bud. Owners are asked to have their animals neutered, not dump them nor let them breed in the streets in an uncontrolled manner.

4. Which dogs must be neutered ? In a stray dog population there are: – Free-roaming dogs with an owner – Community dogs – Abandoned dogs – Feral dogs – Owned dogs The first two categories are the most fertile and thus are the target. These dogs are also easy to collect. If at least 70% of the bitches are neutered, the population will diminish. De sterilized dogs will preferably be vaccinated at the same time against Rabies.

5. Why are the neutered dogs returned afterwards ? The intention of CNVR is to create a sterile population. If the dogs are NOT returned, the vacancies will be filled with fertile dogs from the surrounding area. Every returned dog will take the place of a not-sterilized new animal. The population will increase less or even diminish, because the sterilized dogs cannot breed.

6. How fast will a population grow ? This depends on the Carrying Capacity: 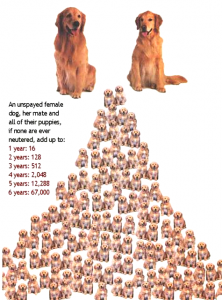 The maximum capacity of an area for certain species. This is determined by the available resources like food, water and shelter. If there are sufficient resources, the population will always grow until this maximum number. Every animal that is taken away will immediately be replaced by a another animal migrating from another area or by a newborn. If a bitch gives birth to average 4 pups, this number will be quadrupled every generation. With sufficient food a bitch can eventually produce more than 10.000 pups in five years.

7. Why does killing or removing animals not work ? As long as there are sufficient resources, the place of every killed or removed animal will be taken by a new animal and the population will grow until the maximum Carrying Capacity. Killing (often done in Eastern-Europe) or catching and putting animals into shelters has merely a temporary effect. It is useless as a measure to reduce the population on the long term. Also emigrating animals does not help to solve the problem in that country. New dogs will come, replacing the adopted dogs and these again will have to survive in deplorable circumstances. What often happens is, that a pack will produce sufficient growth in order to retain enough strength. More pups are born but due to lack of resources the weak dogs will die a terrible death by starvation.

CNVR (Collect, Neuter, Vaccinate, Return) is strongly recommended by our organization. We believe the stray animal overpopulation problem should be solved in the countries where it exist and we don’t promote emigration of animals.

Below you can find some links to articles about CNVR.

Instagram
Invalid username or token.
We use cookies to ensure that we give you the best experience on our website. If you continue to use this site we will assume that you are happy with it.OkPrivacy statement (Dutch)